1555
Scan with our application for additional information. Holy Spring and Chapel of Saint Anna, village of Trakiets

village of Trakiets in Haskovo, Bulgaria 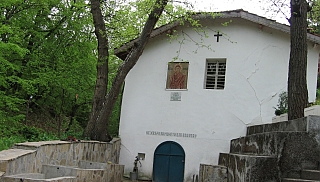 The Chapel of Saint Anna near the village of Trakiets is built entirely with donations and volunteer work from people who found a remedy in the healing water of the spring. Faithful people from all over Bulgaria come crowding to the holy place, seeking salvation. The living water from the holy spring helps not only with impaired sight - many childless couples conceive and have a child after visiting the chapel. Hundreds of people suffering from various ailments receive a cure from Saint Anna.
In 2009, to mark the holy place, the mayor of Trakiets, Krasimir Boychev, with his own funds, raised a 13-metre-tall metal cross.
Every year, on the day of the Assumption of SaintAnna (July 25), thankful people from all over the country gather together at the holy spring of the chapel, a water-blessing ceremony is served and a sacrificial kurban meal is offered.

INTERESTING FACTS:
The history of this holy place began almost two centuries ago. A legend goes that there was a woman who was born blind. On the eve of the Assumption of Saint Anna - July 25, the Lord appeared to her and told her, ""You will go to Elechcha (the old name of the village of Trakiets). There, in the woods, there is a stone from which water is gushing out. You'll take from this water, wash your eyes and will be able to see."" The woman went there and found the spring. She spent there the whole night, washing her eyes. On the following day she opened her eyes and she could see. This was when the construction of the chapel began, which the locals named St. Anna, the patron saint of women and children, a healer and mother of Virgin Mary.
Rate: